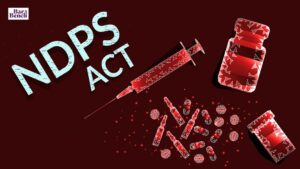 The instant bail petition filed under section 439 of CrPC for grant of regular bail in SC No.8605 of 2016 under section 20 & 29 NDPS ACT registered at Police station NCB, in the case of Kale Ram @ Kalu Ram v. Narcotics Control Bureau, Bail Application No. 3045 of 2019 in THE HIGH COURT OF DELHI, the court has disposed the petition and granted bail to the petitioner.

The learned senior standing counsel for the NCB submitted that the petitioner Kale Ram is the main accused who used to deal in the contraband through the other co-accused, and there is a recovery of commercial quantity of charas in this case. He further submitted that at this stage, the court is not supposed to prejudge the evidence and the petitioner is unable to show even prima facie that he is not guilty of such offense and also that there is an embargo u/s 37 of the NDPS Act in granting bail to the petitioner.

The Hon’ble court came to the conclusion that the fact that the 2 co-accused are already on bail, nothing has been recovered from the petitioner in form of contraband or money, the embargo of Section 37 of NDPS Act does not come in the way in granting bail to the petitioner as far as the facts of the present case are concerned. The court grants the petitioner bail on his furnishing personal bond in the sum of Rs. 50,000/- with one surety in the like amount, to the satisfaction of the learned Trial Court. The petitioner shall not leave the country without the prior permission of the concerned Trial Court.