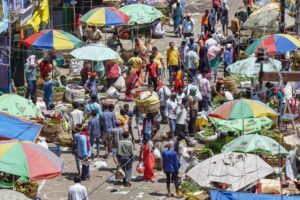 The facts of the case are that retail vendors, who were permitted to install small stalls along the road, abutting Railway Station, in Suburbs of Mumbai, have declined to shift their stalls, at alternate locations, offered by the local Authority. As also they are not willing to accept the compensation offered by the local body – in lieu of their stalls. The reason being, the alternate sites offered were not ‘suitable’.

Appellant is a registered Association of stallholders. Its’ members claim that the Standing Committee of the Corporation vides Resolution dated 17th August 1983 authorized them, to install stalls of a specified size along S.V.P. Road, abutting Mulund Railway Station, between the west side of Railway Station Gate up to Police Chowki. Indisputably stalls abutting the Railway Station had caused the situation like water-logging in past in rainy season. Thus, to prevent waterlogging in Railway Station, Respondents decided to construct a stormwater drain, to cause the water run-out. As also since the suit stalls are constructed along a road, having a large volume of vehicular traffic, Corporation decided to shift stall-holders, to alternate sites to widen the width of the road.

The corporation issued notices on 17th August 2017 to the members of the Appellant, under section 485 and 485A of the Mumbai Municipal Corporation Act. These notices were challenged in suit no. 2438/2017. Whereupon, the learned Judge, City Civil Court, on 6th November 2017 passed the following order. Thus, the learned Court directed the members of the Association to submit all relevant documents to Municipal Authority for its consideration.

Vide notices dated 29th February 2020 purportedly issued under Section 314 of the MMC Act, Corporation offered alternate places at six different locations to the Appellants’ members and were directed to opt their choice and shift stalls within 24 hours. On 10th February 2022, Counsel for the Corporation informed the Court, that members of the Appellant-Association did not exercise the option. In that view of the matter, Corporation was called upon to place on record its’ policy decision relating to rehabilitation of projected affected persons. The stall-holders were not willing to shift to the new markets; but were ready to reduce the size of the stall to ½ of their present size, if they were allowed to remain on the existing site i.e. on S.V.P. Road. Where after it appears the stall-holders were permitted to reconstruct the existing stalls of a particular size upon certain terms and conditions.”.

Therefore, neither the resolution of the Standing Committee nor the letter dated 27th June 2002 creates any interest in favor of the stallholders. Therefore, a character of possession of the stall-holders is that of ‘licensees’ and nothing more. Thus, taking into consideration, the facts of the case, it is evident that even in past, Corporations’ efforts to shift stall-holders to the new markets at plot no. 36 and 5-A, were successfully stalled by the members of the Appellant-Society.

The Hon’ble court is not of the view that the Appellants have made out a prima-facie case, nor the balance of convenience tilts in their favour, nor would they suffer irreparable loss if shifted to new site offered by the Corporation. If at all they do not wish to shift to the new sites, Corporation is ready and willing to compensate them in accordance with the law and policy in place. In that view of the matter, the order impugned requires no interference. Appeals are dismissed.