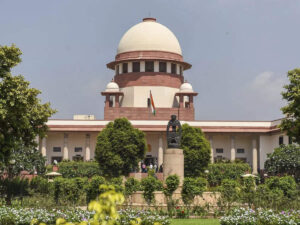 The Supreme Court, in a recent case, held that while deciding upon the matter the High Court went beyond the scope and ambit of the proceedings that are going on before it & therefore, the order the jurisdiction has been exceeded. This was held by the supreme court bench comprising of Justice M.R. Shah & Justice B.V. Nagarathna, in the matter of SRS Advertising & Marketing Pvt. Ltd. & Ors. v Mr. Kamal Garg & Anr in CIVIL APPEAL NOS.1302­1303 OF 2022, decided on February 16,2022.

The appeal arose from the grievance caused by the Delhi High Court’s order in Writ Petition (Civil) No.12530 of 2021 and in Review Petition No.197 of 2021.The petitioner has claimed that the High Court has erred in appreciating the facts of the case.

The original petitioner was auction purchaser who purchased the property for a sum of 85 lakhs. The reserved price of the property was 54 lakhs, and the highest bid was made by the petitioner of Rs. 85 lakhs. After making the bid & depositing the amount (22,25,000 [25% Bid price]), he moved an application to the Recovery officer for some clarity. The recovery officer dismissed the application & forfeited 10% of the amount. The appeal was taken to DRT who dismissed it, which was then proceeded to DRAT challenging DRT’s order.

The matter was taking to the High Court challenging interim relief not granted with regard to the auction. The High Court disposed off the petition granting, one more opportunity to the original petitioner to deposit the balance amount. The present appeal has been preferred by the original respondent.