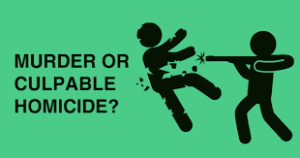 Quashing the order of High Court where it erred murder to be culpable homicide, the Supreme Court bench ruled that if the facts and circumstances of the case fall within Clause three and four of Section 300 IPC, the culpable homicide will amount to murder. This was held by the Supreme Court Bench comprising of Justice M.R. Shah & Justice BV Nagarathna in the case of The State of Uttarakhand v Sachendra Singh Rawat decided on 4th February,2022 in the CRIMINAL APPEAL NO. 143 OF 2022.

The present appeal arose from a grievance caused due to order passed by the High Court of Uttarakhand in Criminal Appeal No. 110 of 2016. The respondent was charged and tried with murder under Section 302 IPC for the murder of Virendra Singh. The factual matrix is such that the respondent and the deceased got into a fight during a ceremony in the village. However, there fight was intervened by the villagers to cool down the situation. At midnight, the respondent went after the deceased with a ‘Phakadiyat’ (a rough wooden stick) and gave him severe blows on his head. Due to multiple injuries and skull fracture, the deceased passed away. His wife and few other villagers were eye witness to the incident and lodged a complaint. After investigation, the trial court charged him under Section 302 and imposed the sentence of life imprisonment. The respondent took the matter to High Court, and the court held the incident to bee culpable homicide not amounting to murder and converted life imprisonment to ten years imprisonment.

The Court observed the facts and laws of the case and arguments from both the side. It was stated that the first incident of altercation between the accused and the deceased was at the place of mehndi ceremony. The second incident took place at about 12:00 in the night, 9 which can be said to be the actual incident which happened when the accused attacked the deceased by “Phakadiyat” and gave several blows to the deceased. Therefore, the second incident cannot be said to be a result of sudden fight in the heat of passion upon a sudden quarrel. The court ruled out that the High Court has erred in observing that the incident has taken place  due to the first incident.

The court quashed the order of the High Court altering finding of murder to one of culpable homicide not amounting to murder and consequently converting the sentence from life imprisonment to ten years rigorous imprisonment. The respondent-accused is held guilty for the offence under Section 302 IPC for having killed and/or committed the murder of the deceased Virendra Singh and he is sentenced to undergo life imprisonment. Hence, the judgment of the Sessions Court was restored.