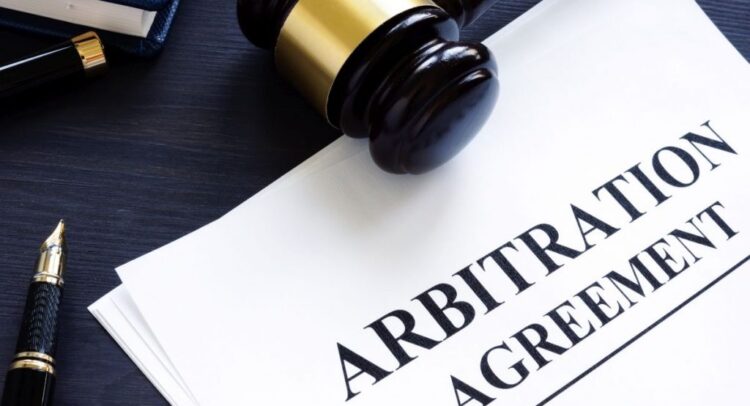 Only if both parties agree may arbitration take place. The parties write an arbitration clause in the applicable contract in future contract disputes. A submission agreement between the parties can be used to send a pre-existing issue to arbitration. After establishing a successful case under the arbitration clause, the Civil Court loses jurisdiction. MOUSHUMI BHATTACHARYA pronounced this judgment on 21.01.2022 in LINDSAY INTERNATIONAL PRIVATE LIMITED & ORS. V. LAXMI NIWAS MITTAL & ORS.

Lindsay had filed a lawsuit seeking an order for specific performance of a pre-incorporation agreement against defendants 1 through 38, as well as a non-competition contract against defendants 39 through 42, as well as a declaration and injunction. All claims, conflicts, and disagreements between plaintiff no.1 Lindsay and Vesuvius that are the subject of the litigation should be addressed to arbitration under the arbitration agreement provisions included in Lindsay’s Purchase Orders given to Vesuvius according to the applicant Vesuvius, who is the defendant number. 39 in the suit. The applicant further requests that any future actions in the complaint against the applicant Vesuvius have stayed. The arbitration clause refers to Vesuvius as the “Seller” and Lindsay as the “Buyer.” It covers any disagreement, conflict, or interpretation of any terms or claims arising out of or related to the Purchase Orders.

Mr. Tilak Bose, learned Counsel appearing for the applicant, Vesuvius argues that the arbitration clause has not been challenged and is similar in all Purchase Orders made between the plaintiff Company and Vesuvius has assumed finality and that arbitration procedures between the parties are underway as a result of Vesuvius’ successful application filed under section 11 of the Act. Counsel argues that the legislative mandate to refer is reinforced in all three and that the sole need of the Court is to assess if any genuine arbitration agreement exists or not, as evidenced by the change to section 8, the Law Commission Report, and the Objects and Reasons to the Arbitration and Conciliation (Amendment) Bill 2015.

Mr. S.N. Mookherjee, learned Senior Counsel appearing for the plaintiffs, rejects the referral because the issues between the many defendants are intimately intertwined and cannot be resolved individually. Counsel claims that Vesuvius’ reliefs are intended to break composite causes of action and separate required and appropriate parties. The conflicts that are the subject of the litigation, it is said, are not covered by the arbitration agreement and do not emerge from the restricted scope of the Purchase Orders to which the arbitration agreement applies. Counsel cites Sukanya Holdings and the Supreme Court’s recent decision in Vidya Drolia V. Durga Trading Corporation in support of these claims.

The Arbitration and Conciliation (Amendment) Bill, 2015’s Objects and Reasons that the Act was enacted to provide for the speedy disposal of cases relating to arbitration with the least amount of court intervention, as the interpretation of the Act’s provisions by courts has resulted in delays in the disposal of arbitration proceedings and an increase in court interference in arbitration matters, which tends to defeat the Act’s object.

Despite the plaintiffs’ reliance on Vidya Drolia and sections of Hero Electric to argue that the Supreme Court has called for centralized adjudication of conflicts where the issues are intertwined, and the cause of action cannot be divided, the argument must be seen in context. Vidya Drolia’s paragraph 28 alludes to the Sukanya Holdings dicta and occasions when it would apply. However, it does not indicate that Sukanya Holdings is still sound law and would cover all cases where a party requests that the issue be referred to arbitration. The plaintiffs have relied on the pointers in para 41 of Hero Electric in the context of arbitrability and in rem issues.

The only conclusion that can be drawn from the above interpretations and decisions is that once the Court is satisfied, prima facie, that a valid arbitration agreement exists in an arbitrable matter, the Court must take a hands-off approach – rather than a face-off with the arbitration process – and give the arbitral process a decisive push. The Court’s investigation is restricted to this and nothing else.

The current situation comes clearly under N.N. Global’s rule. It’s neither a lis in rem nor a claim to assert a right against the entire globe. The claims and disputes are solely between private parties to determine their rights and responsibilities under the arbitration provision in the Purchase Orders. It should also be mentioned that even before the revision to Section 8 in 2016, the court authority was statutorily required to send the dispute to arbitration once the existence of a valid arbitration agreement was established; Rashtriya Ispat Nigam Ltd. Vs. Verma Transport Co.

As a result, this Court believes that the applicant/defendant has successfully established a case for referring the issues to arbitration under the Purchase Orders’ arbitration provision. The only remaining uncertainty is how the case will be resolved in the defendant’s case. According to Hindustan Petroleum Corpn. Ltd. v. Pinkcity Midway Petroleums, once a section 8 application is granted, the Civil Court loses jurisdiction to hear the case against the defendant who filed the reference application.