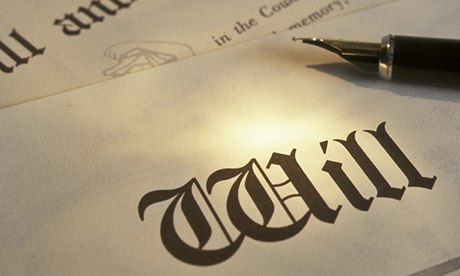 While examining the Genuity of the will, the only legal requirement is examination of one attesting witness and there is no need to examine the scribe of the will. This was held by the Hon’ble Justice Shri A.P. Thaker in the case of Sonaji Raghala Chaudhari vs. Akha Diwala Chaudhari Thr’Heirs [R/SECOND APPEAL NO. 222 of 1982] on the 02nd of July before the Hon’ble High Court of Gujarat at Ahmedabad.

The brief facts of the case are, the respondent is the son of Diwala Gausa (deceased). He got married and shifted to his father-in-law’s home and has not maintained his own father. The appellant is the grandson of the deceased and had lost his father when he was 12 years old and since then has been under the care of the deceased. The deceased in his will had allotted his full property to the grandson and had not allotted anything to the respondent. Aggrieved by this, the defendant filed a case against the appellant. the respondent had filed a Suit against present appellant being Suit No. 108/1978 for the partition alleging that the properties are of the joint family properties and possession of his 1/2 share in the suit property. According to him, the trial Court, by its judgment and decree dated 31.12.1980, dismissed the suit of the plaintiff against which the plaintiff has filed First Appeal No. 33/1981, wherein the First Appellate Court allowed the Appeal filed by the plaintiff. Being aggrieved and feeling dissatisfied with the judgment and decree of the Appellate Court, Surat passed in Regular Civil Appeal No. 33 of 1981 dated 17.11.1981, the appellant has preferred this Second Appeal under Section 100 of CPC.

The learned court heard the submissions of both the parties and observed that the property in question was self-acquired. In answering the question of the Genuity of the will, the court relied on the judgment in Beni Chand v. Kamala Kunwar, reported in AIR 1977 SC 63, wherein, it was held that, “In order to assess as to whether the Will has been validly executed and is a genuine document, the propounded has to show that the Will was signed by the testator and that he had put his signatures to the testament of his own free will; that he was at the relevant time in a sound disposing state of mind and understood the nature and effect of the dispositions and the testator had signed in the presence of two witnesses who attested it in his presence and the presence of each other. Requirement of Section 68 of the Evidence Act in proving the Will is to produce at least one of the attesting witnesses. In view of the provisions of Section 68 of the Evidence Act, there is no need to examine the scribe of Wil. What law requires is examination of at least on attesting witness.”

Since the first appellate court had set aside the judgement of the trial court on the grounds that the scribe of the will had not been examined, the high court allowed the present appeal and set aside the judgement by the first appellate court and reinstated the judgement by the trial court and decreed, “All the legal requirements of proving the Will has been satisfied and the factum of excluding the plaintiff Akha from the properties by the testator is reflected in the Will itself, are sufficiently proved. Of course, there is no description of the entire properties in the Will. However, there is specific averment of bequeathing all his properties which are available at the time of his death to his grandson in the Will. Therefore, there is no question of non- specification of properties in the Will.”