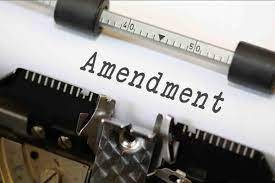 If the amendment doesn’t bring a drastic change in the nature of proceedings and when it is necessary to determine the real controversy between the parties and to facilitate grant of complete reliefs, such amendment shall be allowed. A single-judge bench comprising of Justice M. S. SONAK adjudicating the matter of IGNATIUS BRAGANZA v. THOMAS AMBROSE BRAGANZA (WRIT PETITION NO. 208 OF 2021) dealt with the issue of whether to allow amendments in the claim or not.

In the present case, the petition is filed challenging the order 8/2/2021 which allowed the Respondent’s Defendants’ application to amend the counter-claim and, inter alia, to seek a decree of eviction against the Petitioner herein from the suit house.

The petitioner submitted that this amendment was allowed after the trial was concluded and the matter was posted for final hearing. It was submitted that the application for amendment was made almost after 18 years. This application is nothing, but an attempt to plug the lacunae in the Respondents’ case. The nature of the proceedings will virtually change if such an amendment is to be allowed. Also, the relief by way of the amendment is ex facie barred by law of limitation. It is pointed out by the petitioners in earlier proceedings, similar relief was applied for, but was rejected and, therefore, such relief will also be barred under the principles of res judicata.

The Respondents submitted that they have already prayed for setting aside the Gift Deed dated 2/1/1979, on which the alleged title claim of the Petitioner, is based. Also, prayer was made for permanent injunction and mandatory injunction to demolish the structure raised by the Petitioner. By amendment, the Respondents only propose to seek a formal decree of eviction, so that the Respondents secure the vacant possession of the suit premises. Also, it is contended that the proceedings will not change and even the contentions based on limitation and res judicata, are not correct and, in any case, such contentions can always be left open for adjudication in the suit.

This Petition is, therefore, disposed of by making the following order :

(A) The impugned order, to the extent it grants leave to amend the counter-claim, is not interfered with. But, the same is made conditional upon the Respondents paying costs of 25,000/-, to the ₹ Petitioner within a period of 2 weeks from today.

(B) The costs to be either directly paid to the Petitioner or deposited before the Trial Court, within two weeks from today. If this is not done, the impugned order dated 8/2/2021 shall be deemed to have been set aside, without reference to this Court.

(C) If, the Petitioner desires further opportunity to lead evidence in the matter or to recall any witnesses, then, the Trial Court should consider such applications on their own merits, having regard to the fact that the amendment was applied for at the belated stage and has now been granted.