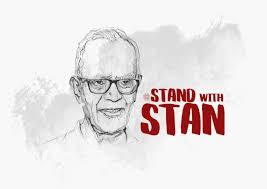 Bhima Koregaon 16 a.k.a Stan Swamy an Indian Roman Catholic priest was a tribal activist and was arrested on 8th October 2020 under UAPA by the NIA and was charged and held responsible for Bhima Koregaon case and his link with Maoists. The legal procedure was blatantly abused and he was denied bail despite his medical condition.

Swamy was neither interrogated by the police and also prior to arrest, the computer and relevant documents were seized and all the necessary information & evidence was already been extracted by the investigation agencies. The arrest of a person is made with an objective to ensure that the accused does not abscond and the investigation authorities could carry out the investigation without any interference and the evidence doesn’t get tampered with. Swamy fully cooperated with the investigation but all of the efforts made didn’t matter. There was no reasonable apprehension that Swamy who is a serious patient of Parkinson would flee. Since Swamy was accused under the offences of UAPA, there was no judicial remedy available to him. His only relief was he can write an application to a government-constituted committee.

The whole sentencing of Stan Swamy was based on the evidence found on one of the other human activists, and Dalits with whom he was associated. It was also alleged that these organizations were planning to assassinate the Prime Minister. He was arrested and was transferred to a jail in Maharashtra.  But it might be a little concerning that the whole process of arrest was done without following the proper legal procedures. Where the case is needed to be looked into, instead of a swift conviction, the trial has not even begun. The court has not even taken cognizance of the charge sheet and no witnesses have been examined.  The jail in Maharashtra was overcrowded and the Supreme court looking into the increased spread of covid-19 ordered for decongestion of these jails. After the Supreme court’s order, he still had to be in jail. Swamy pleaded before the court for a straw and sipper to drink water as he required external aids due to Parkinson to which the NIA replied after 20 days.  For such a small requirement, Swamy had to file a petition which could have been easily mitigated by the jail administration. Also, it is the duty of the Jailors to look after the prisoners who are in need of special care due to their health ailments. All of these instances were recklessly ignored by the Police system.

Later due to his medical condition Swamy pleaded before the Trial court for bail. But his application was heard after 4 months and the same was rejected.  The counsels on behalf of Swamy contacted an independent US-based Arsenal Consulting for verifying evidence that incriminated him and for which he was detained. It was found that the evidence was tampered with by using Netwire by the attackers and their last act was done on 16th April 2018, a day before when the laptop was seized. But the trial court found these reports as extraneous. Swamy before even reaching the stage of the trial was tied by the clutches of the faulty justice system.

In May, Swamy sought medical bail before the Bombay High Court due to his health issues which included Parkinson’s tremors, hearing loss, intense lumbar and abdominal pain But the jail controverted the claim and stated that there was nothing to worry about.  The High court denied that bail application and allowed for treatment at a state or a private hospital. He was also not provided with the medical reports while he was in custody and hence he had to file with the older reports. The NIA claimed that since the reports were old there is no conclusive proof to establish that the accused has Parkinson. Later Swamy developed symptoms of COVID in the prison. He was transferred to a private hospital at his own expense and he was tested positive. But by then, it was too late and he succumbed to death. The day when Stan Swamy took his last breath in the hospital, he was still an innocent undertrial prisoner who was one of the many victims of this draconian law and failed criminal justice system.  The Act of UAPA was meant for terrorists, not for these innocent people. Around 8000 arrests have been made under UAPA out of which only 155 were convicted. This law is applied in a very casual sense and hence creating disbelief among the citizens towards the justice system. Not only this act calls for a serious correction but also it is to be realized that this act must be used in rare cases only. Unless any act promotes violence against the Country by the use of weapons, UAPA should not be brought into the picture.