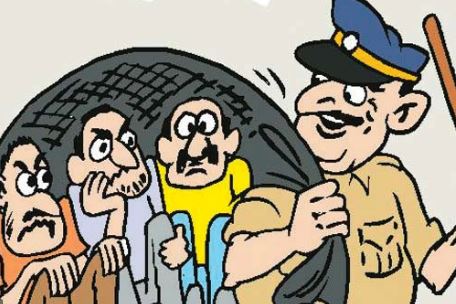 Whoever makes any preparation for committing dacoity must be punished by imprisonment for a term not exceeding ten years, as well as a fine.’ And whoever, at any time after the passage of this Act, is a member of a group of five or more people gathered for the purpose of committing dacoity, shall be punished by rigorous imprisonment for a duration of up to seven years, as well as a fine, this was referred by Justice Raj Beer Singh of the Allahabad High Court in the matter of Ruri versus The State [CRIMINAL APPEAL No. – 161 of 1982]

The order regarding this was passed when According to the prosecution, on June 23, 1979, at around 09.15 p.m., a police party consisting of PW-1 S.I. Devichand, PW-2 constable Sardar Singh, PW-3 S.O. Suraj Pal Singh, and other police officials left the police station Pahasu, district Bulandshahar, for patrolling in the area of the station. They were on their way to village Lal Nair after visiting Pitampura, Sarangpur, and Nagla Hari Singh, and when they got close to Dharamshala Hargyan in the jungle of village Turkipura, they heard some voice from inside the said Dharamshala, and on suspicion of anti-social elements, S.I. Surajpal divided the police party into two groups, and they saw that five armed men were inside. Other criminals claimed that Chhanga Khatik’s residence is located on one side of village Turkipura and that they may easily conduct dacoity there. At the same moment, a police party confronted them, and four of the miscreants were captured on the scene, while one of the miscreants managed to leave.

PW-1 S.I. Devichandra claimed in testimony that he was posted as a sub-Inspector at police station Pahasu in the month of June 1979. On June 23, 1979, he and other police officers left the police station for patrolling, and after visiting villages Pitampura and Nagla Hari Singh on their way to village Tukipura, they arrived near Hargayan Dharamshala. They could hear noise and smell smoke coming from the dharmshala.

The station officer divided the police party into two groups, and they arrived at the said dharmshala, where they overheard five people conversing in the dharmshala’s verandah, one of whom said, “Let us wait for Pahalwan,” and another stated, In village Turkipuri, the house of Changa Khatik is outside.” The police party confronted them at the same time, and four of the miscreants, including the appellants, were detained on the scene, while one managed to leave. On their search, one country-made pistol of 12 bore was recovered from each of the accused-appellant. Some live cartridges were also recovered from them.

The accused’s guilt must be shown beyond all reasonable doubt, according to a core premise of criminal law. The prosecution bears the duty of proving its case beyond a reasonable doubt, and this burden never transfers. Another golden thread that runs through the web of criminal justice administration is that if two viewpoints on the evidence presented in the case are feasible, one pointing to the accused’s guilt and the other to his innocence, the view favourable to the accused should be accepted.[Vide Kali Ram V. State of Himachal Pradesh, (1973) 2 SCC 808; State of Rajasthan V. Raja Ram, (2003)8 SCC 180; Chandrappa & Ors V State of Karnatka, (2007) 4 SCC 415; Upendra Pradhan V. State of Orissa, (2015) 11 SCC 124 and Golbar Hussain & Ors. V. State of Assam and Anr., (2015) 11 SCC 242]. In the instant case considering the entire evidence, it appears that the prosecution version lacks genuineness and authenticity.

The prosecution’s account appears unnatural because it’s quite unlikely that the aforementioned police officials could have overheard the appellants indicating they were going to conduct dacoity. Even if the purported dialogue is true, it scarcely qualifies as an offence under sections 399 and 402 of the IPC. In light of the facts and circumstances of the case, it cannot be ruled out that a storey about one of the miscreants fleeing the scene was presented to bring out figure five and put the case within the scope of the offence punishable under section 402 IPC. Furthermore, there is no proof that the supposedly recovered firearms were operational.

In view of the above, the conviction and sentence of accused-appellants Ruri and Jagdish under section 399, 402 IPC and section 25 Arms Act, recorded by the trial court, is set aside and they are acquitted of the charges levelled against them. The appellants are on bail and thus, no further order is required. The appeal is accordingly, allowed.