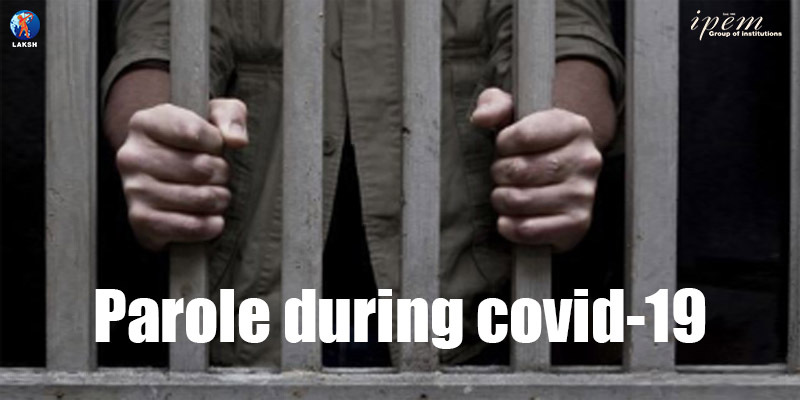 Parole is considered conditional freedom for a prison inmate. The parolee gets out from behind bars but is bound by law to live up to a series of responsibilities. A parolee who doesn’t follow the rules risks going back into custody. This judgment is a D.B.  criminal writ petition (parole) No.1020/2021 this case Nilam Kumar vs. the state of Rajasthan, it has been given in the high court of Rajasthan, on the 22nd June of 2021 by Hon’ble Mr. justice Sanjeev Prakash Sharma and Hon’ble Mr. justice Mahender Kumar Goyal, the petitioner asked in prayer to the court to make necessary amendment in rule 10b(2) of the Rajasthan prisoners release on parole rules 1958, as he himself wanted a release on parole and also wanted to extend his period of release on parole.

According to this case, the petitioner was convicted and sentenced to undergo imprisonment for life, for the offenses under section 302,307 of IPC and section 3(2) (V) of SC/ST act, 1989 and section 3/25 of arms act at the central jail, Udaipur and has already served 6 years of imprisonment, according to the order on 25/05/2021 the petitioner was granted emergent parole for 15 days under rule 10A of the Rajasthan prisoners ( release on parole) rules, 1958   by the district magistrate because his father was infected by the coronavirus. However, the petitioner requested an extension of this period. The government of Rajasthan inserted rule 10B in the rules of 1958 as the special parole in the wake of covid – 19. Under the amendment in the interest of the prisoners and on recommendation by the prisoner’s parole advisory committee the period was extended to 4 weeks to only those prisoners who have showcased conduct comfortable to the law on availing the previous parole. However, this amendment doesn’t apply to prisoners convicted for rape, murder, acid attack, etc. The state government vides notification on 17/05/2021 amended rule 10B of the rules of 1958 according to sub rules the existing expression shall be substituted, the extension of the parole shall be substituted.  The council for the petition claims for relief in the writ petition and held that the provisions of rule 10B of the rules of 1958 are discriminatory. The council prayed for amendment of the rules so as to extend the parole only as a special treat for those on emergent parole as here the father of the petitioner was affected by covid – 19. However, the respondent opposed the prayer. Section 432(5) of Crpc 1973 gives the power to the court to exercise its jurisdiction. According to rule 9 of the 1958 rules, a parole period is when a prisoner has availed parole previously and has exhibited good behavior and not likely to relapse into crime and those who upheld good conduct in jail. However certain categories of prisoners will not be eligible for release on parole e.g., Persons convicted under the Explosive Substances Act, 1908, Prisoners who have escaped from the Jail or Police custody or attempted to escape, etc. The division bench of this court referred to the case of Kishan vs. state of Rajasthan & Ors – 1990(1), Arnesh Kumar vs. State of Bihar-AIR 2014 SC 2756, three-Judges Bench of the Hon’ble Supreme Court in Union of India & Ors. vs. Association for Democratic Reforms & Ors. -(2002) 5SCC 294, Priamvada vs. State of Rajasthan & Ors. -MANU/RH/1419/2001.

In conclusion, the court held that “We find no such exigency obtaining in the present case. Learned counsel for the petitioner could not satisfy this Court as to its authority to issue direction to the respondents to amend the Rule with which we otherwise do not find any fault. In the result, the criminal writ petition (parole) is dismissed being devoid of merit.”