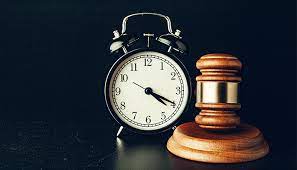 Limitation period must be strictly adhered to while filing a suit. Suit filed beyond the allowable limitation period and is clearly barred by the law of limitation. A single judge bench of Justice Milind N Jadhav; while adjudicating the matter in Eknath Nivrutti Hegadkar v. Aagatrao Dyanu Ghodake; [WRIT PETITION NO. 7436 OF 2017], dealt with filing of suits post the limitation period as prescribed by law.

Petitioners are the original defendants and respondents are the legal heirs of the original plaintiff. The suit property for which entitlement is claimed by the plaintiffs situated in District Solapur. The original plaintiff i.e., respondent herein filed a civil suit against the defendants for permanent injunction in respect of the suit property. The original plaintiff expired on 16.04.2015. His legal heirs are the present respondents. Respondents i.e., plaintiffs filed application stating that original defendant No. 1 had expired on 27.03.2014 and his legal heirs (present petitioners) were required to be brought on record. Petitioners objected to this application on the ground of maintainability. Respondents -plaintiffs thereafter filed an application for seeking amendment of the suit plaint. This Application was filed on 25.10.2016. The petitioners objected to the proposed amendment application on the ground of maintainability and limitation, inter alia, contending that the proposed amendment if allowed would change the nature of the suit and a completely different relief would be introduced and granted by the Court. On the aspect of limitation, it was contended that the cause of action to seek the relief had arisen in 2008 immediately on filing the written statement and the application was filed after a period of 8 years. The learned counsel appearing for the petitioner stated that the application was filed beyond limitation after a period of almost 2 years and 3 months and therefore not maintainable. He also vehemently stated that the proposed amendment of seeking declaratory title is unconstitutional and would fundamentally change the nature and character of the original suit. The amendment sought for to seek declaratory relief of title could not have been allowed and granted in view of the aforesaid provisions because the original suit was a suit simpliciter seeking injunction.

The Court upon considering the aforesaid facts stated that; “It can be summarized that the respondents’ (plaintiffs) application filed on 25.10.2016 after a time gap of almost 8 years is far beyond the allowable limitation period and is clearly barred by the law of limitation. More importantly, the amendment sought for by on the basis of a deed of sale pertaining to the year 1979 will involve complicated questions of facts and law which are required to be proved by the concerned party by leading evidence. This relief of seeking declaratory title alters the nature of the original suit for injunction. Therefore, the order passed below allowing the amendment application filed by the respondents (plaintiffs) is required to be interfered with and is hereby quashed and set aside.”